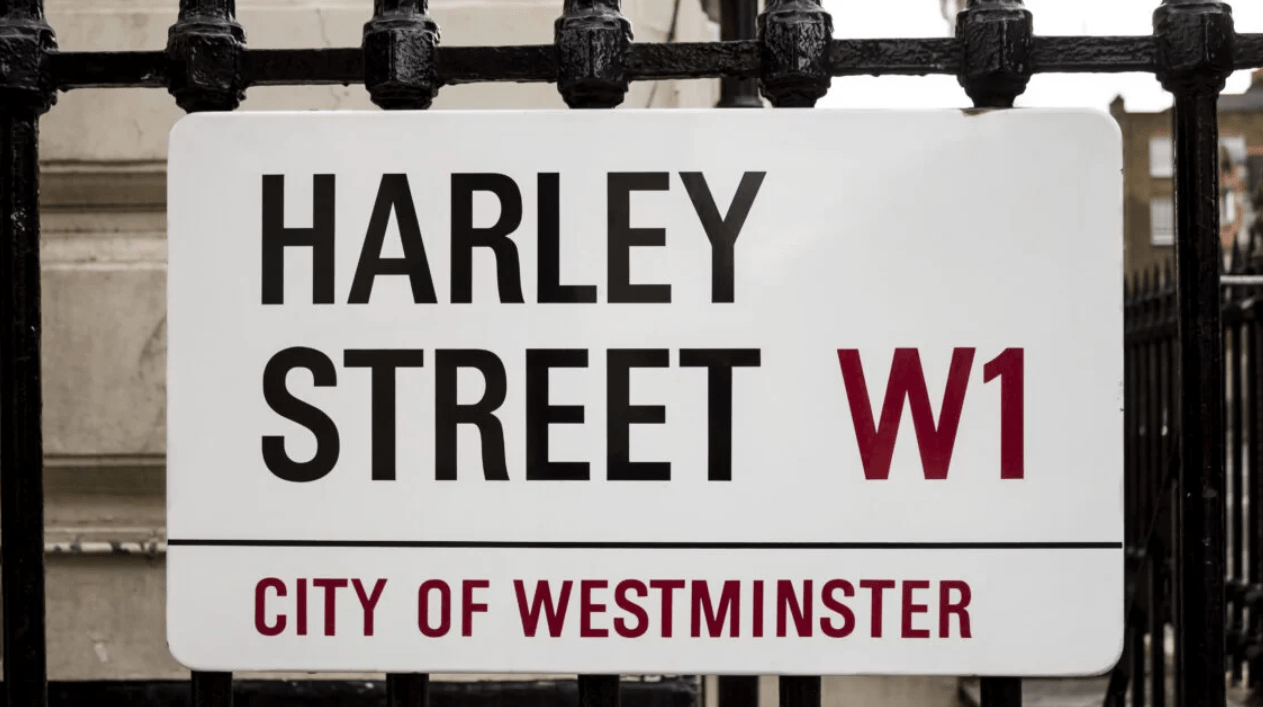 Whether you live in the heart of London or live across the pond, you will have no doubt heard of Harley Street and what it has become famous for… health. Most of the people all over the world know Harley Street for being the most prestigious centre of high-quality private health clinics

in London. Harley Street has become so well renowned for not just only Healthcare but ‘health care with a heart’ as the street boasts many, many businesses known for their patient centric approach gaining a trusting and loyal customer base.

Harley Street itself is incredibly long encompassing all of these high-end, high-quality clinics. The private clinics and Physiotherapy rooms stretch from Cavendish Square Gardens near Oxford Street, all the way to the south as far as Marylebone Road and Regent’s Park in the North, nearly a kilometre in length. Harley Street is situated in very close proximity to some of London’s main railway stations, and underground stations such as Kings Cross and Paddington, Harley Street is just a 6-minute walk from Bond Street station on Oxford Street making it highly accessible and well-known to Londoners. However, the history of the street itself is very rich and lesser known by today’s population. Here is some background information of how Harley Street came to be the most well-known medical street in the UK.

Harley Street began in 1713 when Edward Harley married Henrietta Cavendish Holles, the daughter of the Duke of Newcastle. They entrusted architect John Prince to redevelop the 92-acre Marylebone backwater Henrietta had inherited. The result was an attractive grid of beautifully proportioned townhouses, many of which remain unchanged to this date! All but a small portion at the north end, on Crown land, belonged to the Cavendish–Harley or Portland Estate, and today it remains in the hands of its successor, the Howard de Walden Estate.

In 1860 Harley Street began to establish itself as a medical vicinity, and there were around 20 medical practices that existed on the street at that time. In the Georgian period, there were over 200 doctors based in Harley Street alone. Today, there are more than 5,000 medical specialists, including Physiotherapists and surgeons operating out of what is known as the Harley Street Medical Area. HSMA.

At ALO Physiotherapy Clinic, we’re proud to have been a part of the Harley Street Medical Area community for over 20 years, first setting up our Physiotherapy clinic in 2001. ALO Clinic was founded by leading London Physiotherapist André de Oliveira. Since our establishment, we have endeavoured to maintain our Harley Street reputation for providing truly individualised patient care with superior levels of skill and customer service. The majority of our patients and clients are referred to the clinic by our neighbouring Harley Street doctors, surgeons and consultants that are confident our patients will receive the very best care.

If you live locally to Harley Street and have been suffering with pain or a condition that you are yet to find help with, why not book a FREE 15-minute discovery visit with us? In this complimentary visit you will have a chance to speak to a physio about your needs/and or condition and they will let you know if physio is right for you. Join the community of happy healthy Harley Street customers who receive the gold-standard of health care. Head to the testimonials section of our site to learn what our clients such as no5* in the world Tennis player Stefanis Tsitipas, and Great Britain athlete Dwayne Cowan have to say about us.

← How to avoid pain as a runner… How to prepare your body for the Tennis season and avoid Tennis elbow! →

Recovering from a full Achilles rupture. Started my work with Nina in feb and my progress has only been positive and upwards and I am almost at full speed again. Nina put me back together again almost from scratch. She is the best physio I have ever worked with and will again. Very knowledgable and very hard working. Can’t recommend enough.

What a great find! My orthopaedic surgeon recommended them and I can't rate Luigi, Gloria and the team more highly. Excellent service and very effective treatment- recovering nicely!

I am 84 years old, and have always been fit and healthy and exercised regularly. 3 years ago I underwent emergency surgery for peritonitis, and had a colonoscopy bag for 6 months and straight after surgery to reversal of the stoma. After this surgery I felt my legs very weak. To complete my drama, during the last summer I developed an abdominal hernia and had surgery for hernia repair. This made me even weaker specially at my legs. I have recovered but felt weak. I started my sessions at ALO Physiotherapy at the beginning of January, with the Vibra Machine combined with specific exercises. I have now recovered my body strength, particularly in the legs. I am now walking normally and without pain. I am delighted!

Great clinic with great people! I was so lucky to find this clinic and even more when I met Andre. He's a very talented therapist and a wonderful person who makes you feel comfortable every time. He helped me to resolve my back problems in few appointments and I will be always grateful to him! From my experience is the best clinic in London and I highly recommend them without any doubts!

One of the best physiotherapy centres in the world! The professionalism and knowledge of this centre amazed me.

I am so glad I found this clinic. Luigi has been amazing. After my 1st session I felt an improvement and now have ALOT more movement and significant reduction in pain. I couldn’t recommend this clinic & Luigi enough. So helpful and flexible whenever I have needed to amend appointments. Every one is fantastic. I will continue to come here for as long as I need.

Andre is the best physiotherapist I came across. As a dedicated martial arts practitioner, I regularly use his services. He has always managed to fix my various back and leg injuries. I would recommend Alo Physiotherapy to anyone who suffers from body pain.

Where do I begin? The journey has been too long with Andre Oliveira and ALO Clinic , as he helped me both physically and mentally to overcome an injury I had in both of my knees. A small injury , after following wrong treatment became chronic and I found myself unable to walk/stand/run and do the simplest things- the mental impact was worse. I was introduced to Andre by Eleftherios Pavlidis who runs Laertion in Athens. lefteris with his team were the first to accommodate the problem and told me what I need to do. As a Londoner, I was introduced to Andre and ALO Clinic, and the rest is history. Since February 2017 when I had the first session with Andre and he identified the biomechanic nature of the problem, along with the use of Tecar the results were visible after one month. Since then, along with personal effort and strengthening I did always guided by Andre, I the problem is restored and the pain is gone. I highly recommend ALO Physiotherapy Clinic , and Andre Oliveira for anyone who suffers from sport injuries , amateurs or professional top athletes.

Very professional staff and friendly environment. I felt a lot better after very first session. Appointment are easily available. I would definitely recommend this place

If you have any questions or queries, or you would like to book a Complimentary Consultation or an appointment please don’t hesitate to contact us.